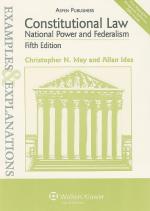 Get Federalism Vs Antifederalism from Amazon.com
View the Study Pack

This student essay consists of approximately 2 pages of analysis of Federalism Vs Antifederalism.

Summary: Essay briefly compares and contrasts federalism and antifederalism.
Webster's Definition of "Federalism": the distribution of power in an organization (as a government) between a central authority and the constituent units (state governments)

FIRST THING TO KNOW: Both Federalists and Antifederalists supported Federalism.

· Federalists were mostly well off, educated, and had a lot of interest in the protection of their money. They mostly lived along the seaboard. They were linked to the Loyalists of the Revolutionary days. Amazingly, many Loyalists supported the Constitution.

· Evolved into the Federalist Party.

· Federalists supported assumption of debt from the Revolutionary war, and funding the national debt at par.

· Another large issue of the Federalist party was the National Bank, which they strongly supported.

· In trying to gain support for...

More summaries and resources for teaching or studying Federalism.