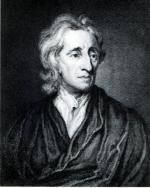 This student essay consists of approximately 3 pages of analysis of John Locke.

Summary: John Locke's summary of social contract chapters 6-8.
In the beginning of the Second Treatise, Locke lays out his theme of his political theory, which is in order to preserve the public good, the main function of government is the protection of private property. Each individual is created equal and has the liberty to act as they want without any interference from any other individual. The one thing that prevents this system from chaos is that every human has the capability of reason.

Locke begins Chapter VI by saying that the power of parents does not lie entirely with the father, that the mother has a role in raising a child. Locke says that if you were to consult reason or revelation, the mother has an equal role in the parental power.

Since children are not born to a full state of equality, though they are entitled to it, parents have...

More summaries and resources for teaching or studying John Locke.