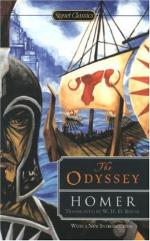 Get A Character Analysis of Odysseus from Amazon.com
View the Study Pack

This student essay consists of approximately 2 pages of analysis of A Character Analysis of Odysseus.

A Character Analysis of Odysseus

Summary: My Essay is a character analysis of Odysseus, the main character in "The Oddyssey" by Homer.
Odysseus's many triumphs repeatedly reveal his heroic nature. Though gore and violence often aid in his success, a kind, noble, and gentle side occasionally peeks through his rambunctious spirit.

Throughout "The Odyssey", a kind and selfless side of Odysseus is revealed. When faced with the choice to sacrifice his men's lives or his own, he willingly chooses the latter and uses his creativity and intelligence to get his men to safety. In Book 9, when they were nearly eaten alive by the Cyclops, Polyphemus, Odysseus "slung a man under each middle one/ to ride safely" (lines 329-340) Since there was no one to tie him, he sent the rams with the men tied beneath out of Polyphemus' cave holding on to the lead ram for dear life. Thus, ensuring the safety or his men before his own.

Odysseus' actions also unearth evidence of honorable character in Book 21, when he plans to massacre the suitors of his wife, Penelope. He orders Eurycleia to "take care of the women's doorway/ Lock it tight/...no one must show her face" (lines 174-177). By sheltering the women from the violence and gore of the plotted massacre, Odysseus reveals a soft spot and a genteel side of his personality.

Of all of Odysseus' heroic traits, the two most commonly exposed are bravery and sagacity. Odysseus often combines these two traits, especially when fighting Polyphemus in Book 9: "rammed deep in his crater eye/...turning it/...and bored that great eye socket," This gory yet incredible act boasts tremendously of bravery, courage, and ingenuity.

In each instance mentioned in the above paragraphs, Odysseus uses his extreme ingenuity to plot his and his crew's narrow escapes. In each instance, Odysseus also exhibits acute bravery and courage, as well as a yearning for others' safety above his own. All these amazing characteristics prove Odysseus to be a hero, looked upon as an incredible warrior and an idol to the people of his time.

More summaries and resources for teaching or studying Odysseus.

A Character Analysis of Odysseus from BookRags. (c)2022 BookRags, Inc. All rights reserved.