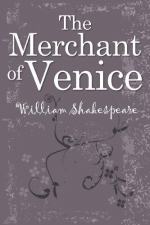 Get Shylock - in 'the Merchant of Venice' from Amazon.com
View the Study Pack
View the Lesson Plans
Related Topics
The Winter's Tale
Venus and Adonis

The Merchant of Venice Essay | Essay

William Shakespeare
This student essay consists of approximately 5 pages of analysis of Shylock.

Shylock - in 'the Merchant of Venice'

Summary: Shakespeares ability to persuade us to love and hate the character of Shylock simultaniously.
Shylock

Shylock is definitely the most complicated character in the play "The Merchant of Venice." He is a Jewish moneylender. Which is a double disadvantage for him, as there were not many Jewish people in England during the Elizabethan Period. Jewish people were hated, and so was the money lending profession, but often, it was the only profession they could take up, as often, Jews were not allowed to own land or trade.

We first encounter Shylock in Act 1, Scene 3, he appears to be a very cautious businessman and seems to be trying to make Bassanio nervous as well. Shylock also makes it very obvious that he hates Antonio, because he is Christian, but also because he lends money, interest free, shown in the following quote:

"I hate him for he is a Christian;

But more for that in low simplicity

He lends out money gratis"

Shylock - in 'the Merchant of Venice' from BookRags. (c)2021 BookRags, Inc. All rights reserved.