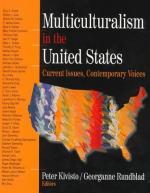 Get Multiculturalism from Amazon.com
View the Study Pack

This student essay consists of approximately 4 pages of analysis of Multiculturalism.

Multiculturalism is very important in our United States. It helps us look at other cultures respectably and freely. Without it, we would be forced to be informed about only the mainstream culture in our society. I consider multiculturalism a good thing.

Many people confuse race and culture. The term "race" has been found out to not mean anything. Scientists agree that, in terms of DNA genetics, "race" has no significant meaning as a way of categorizing human differences. Multiculturalism has found its way to become a popular term because race truly does not define any real differences between people. How people are raised and their beliefs is what makes them different.

More summaries and resources for teaching or studying Multiculturalism.