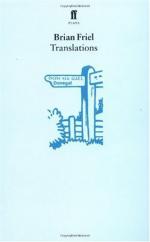 Get The Theme of Mapping in "Translations" from Amazon.com
View the Study Pack
View the Lesson Plans

Brian Friel
This student essay consists of approximately 2 pages of analysis of The Theme of Mapping in "Translations".

The Theme of Mapping in "Translations"

Summary: How the theme of mapping is presented and explored in Brian Friel's "Translations."
In the foreground of the play, `Translations', the audience is presented with the British Ordnance Survey of Ireland, a process of mapping, renaming and anglicising.

The British army needed more accurate maps of Ireland. There was growing dissatisfaction among taxpayers and government officials with existing, inadequate surveys of land sizes and values in Ireland so the government consented to organise the first complete ordnance survey map, at a scale of six inches to the mile.

Various reasons suggesting why Britain wanted rectified maps of Ireland were proposed. Was Britain bringing the benefits of greater scientific knowledge of map-making and mathematics to Ireland? Or marking out confiscated land and providing the army with more accurate information about troubled areas and places where rebels could hide? The later suggestion being more probable.

Work began in the north-west of Ireland in 1827 and was completed in 1833 by the ordnance survey unit of...

The Theme of Mapping in "Translations" from BookRags. (c)2021 BookRags, Inc. All rights reserved.