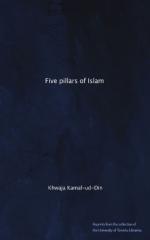 Get Islam's Five Pillars of Faith from Amazon.com
View the Study Pack

This student essay consists of approximately 3 pages of analysis of Islam's Five Pillars of Faith.

Summary: Discusses the life of the Islamic prophet, Mohammad. Examines his creation of the five pillar's of faith. Describes how these pillars provide a blueprint for Muslim life.

The word Islam means "submission" which means all compliance to the rule of Allah, and a person who accepts the faith of Islam bears the name Muslim which means "one who has submitted." Muhammad the prophet was born about 570 C.E. into a family of merchants. As he approached the age of forty Muhammad started to experience visions, which he believed were from Allah and he started to try and expand the religion from his family out. As the religion grew, his followers started to write down of his teachings and then in the 650's devout Muslims put together these written texts into a book now known as the Quran. Another important text is the Hadith which is sort of a guide to interpret the Quran and is just as important being the foundation of early Islamic social and legal customs. The Quran serves as a communication between...

More summaries and resources for teaching or studying Five Pillars of Islam.