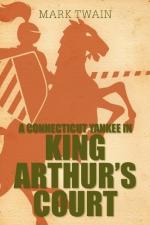 Get Summary of a Connecticut Yankee in King Arthurs Court from Amazon.com
View the Study Pack

Mark Twain
This student essay consists of approximately 2 pages of analysis of Summary of a Connecticut Yankee in King Arthurs Court.

Summary of a Connecticut Yankee in King Arthurs Court

Mark Twain comes across a stranger by the name of, Hank Morgan, while on a tour of the Warwick Castle. Hank bestows his personal reminiscences upon him. Hank begins his memories as he awakens, from a hit on the head with a crowbar. Sir Kay takes him as prisoner and brings him to Camelot. Hank meets a man named Clarence who tells him the year is 528. Hank decides to test if the date is correct by waiting for an eclipse that is supposed to occur on June twenty-first, but when he is presented to the court he is sentenced to death and thus unable to do so.

He tells a lie that he is a powerful magician, and if not set free with privileges that he will make the sun disappear, though, this makes the king set his execution date a day earlier; but to his surprise, at the stake the sun began to darken and so he claimed it his wrath. The court and witnesses panic and allow him to be the king's executor in turn for the sunlight.

With his upheld reputation he uses his power to modernize the civilization according to the nineteenth century. Hank takes on the title The Boss, by weakening the beliefs in Merlin, a powerful magician. He is then challenged by Sir Sagramore to a duel of armed combat to take place after the Holy Grail. During the four years Sir Sagramore was away Hank was given many tasks and encountered a variety of events.

Upon the return to Camelot the date for the battle between Sir Sagramore and Hank was set. He succeeded in defeating him and many more. With this he released his once hidden civilization and began to modernize the society. He also married a damsel, Sandy and had a child, Hello-Central. She becomes ill and they must travel for a doctor. When he arrived back in England he found most of the knights and the king dead. Hank and the other survivors then declared a republic. Because of the war he had to destroy all of the civilization that remained. The knights came and many died. Mark Twain ends the novel by returning to the present time. He finds the Yankee asleep having nightmares of the war and killings as he is slowly dying and remembering the past.