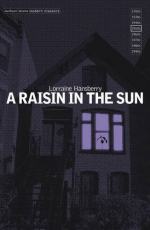 Get A Raisin in the Sun: Feminism from Amazon.com
View the Study Pack
View the Lesson Plans

Lorraine Hansberry
This student essay consists of approximately 2 pages of analysis of A Raisin in the Sun.

A Raisin in the Sun: Feminism

The belief that becoming a doctor in a white and male-dominated field is within her grasp as a black woman exhibits one example of Beneatha's feministic attitude within this play. By refusing to except to become the traditional, impotent housewife, she continues to challenge the stereotypical female character of the 1950s, much to her brother's dismay.

Walter Lee's chauvinistic view of Beneatha and other women presents a perpetual problem for Beneatha. The siblings constantly bicker and fight about Beneatha's expensive ambitions and unruly independence. The obstinate defiance showed towards her brother symbolizes her defiance of the stereotypical female character towards her brother, George Murchison (a love interest), and the like.

Throughout the play, Beneatha searches for her identity by rediscovering her African roots. Her wish to distance herself from the "Assimilationist Negroes" and to express herself as a woman of true African heritage causes her to "naturalize" her hair. Instead of forcing her hair to conform to the style of the stereotypical female of the time she cuts it off and declares natural is beautiful, much to the chagrin of George Murchison.

Feminism is an obvious theme within A Raisin in the Sun and Beneatha displayed traits of supporters of this social theory through her need to express herself by rediscovering her roots, her defiance of her brother and other males in the play, and her optimistic stance when facing the troubles of entering a male-dominated profession.

A Raisin in the Sun: Feminism from BookRags. (c)2022 BookRags, Inc. All rights reserved.