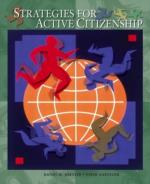 Get Active Citizenship from Amazon.com
View the Study Pack

This student essay consists of approximately 4 pages of analysis of Active Citizenship.

In this essay I will discuss this statement, looking at both sides and stating how far I agree with it.

Active citizenship is about taking an active role in the society we live in. It refers to ways in which we can take interest in our community and how we can help others.

There are many ways in which people can be active citizens. This may be by taking part in protests and campaigns, for example the recent marches carried out by students against the proposal of higher tuition fees or those against the war movement. It may also include making a difference for others in difficult situations such as Erin Pizzy who set up a refuge for battered wives in 1971, this later globalised. Martin Luther King is another example of someone who believed strongly in something, noticed a problem and...

More summaries and resources for teaching or studying Citizenship.