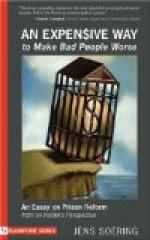 Get The Importance of Prison Reform from Amazon.com
View the Study Pack

This student essay consists of approximately 5 pages of analysis of The Importance of Prison Reform.

The Importance of Prison Reform

Summary: Considers the reasons why prisons exist, to punish or rehabilitate. Argues that Society is flawed in its thinking that by putting criminals in a place away from society we would be better off. Advocates a complete retooling of the current prison system.

In this world we live in many feel that prisons exist to punish, not counsel, offenders. That may be true that Prisons exist for punishment, but they also have an important contribution to make to reducing re-offending by engaging prisoners in rehabilitation programs and purposeful work. Society is flawed in its thinking that by putting criminals in a place away from society we would be better off. To make it worse I am sure that more that 60 percent of Americans are against social reform because they have made up their mind that once a crook, always a crook. This is flawed mainly because it seems to assume that showing people that what they've done is wrong will always accomplish something, that punishing those who commit crimes will deter others from following the same pattern. The problem with prison is that prisons are not a place of rehabilitation.

More summaries and resources for teaching or studying Prison reform.

The Importance of Prison Reform from BookRags. (c)2021 BookRags, Inc. All rights reserved.