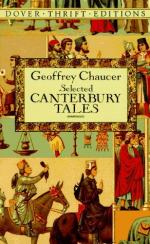 Get Characterization in The Nun's Priest's Tale from Amazon.com
View the Study Pack
View the Lesson Plans

Geoffrey Chaucer
This student essay consists of approximately 2 pages of analysis of Characterization in The Nun's Priest's Tale.

Characterization in The Nun's Priest's Tale

The story starts out with an overly perfect description of Chanticleer, and how he was a beautiful rooster, and how well he could sing. This shows partly how Chanticleer thinks about himself, which almost leads to his death.

That night Chanticleer has a terrifying dream. He dreams a fox comes and eats him. Now when he tells this to Lady Pertelote, (who has loved him since he was seven days old), she called him a coward, and immediately wants nothing to do with him. This shows how deep this "courtly love" really goes. She explains that the dream was probably something that he ate, and was nothing more than a nightmare.

Well of course Chanticleer, the self-absorbed rooster he is, is not going to let his pride get destroyed like that. He fights back and gives many examples about people who have payed no heed to dreams and it costed them later. But when Chanticleer is done, you can see he is just rambling on to save his pride, because at the end of his explanation, he says, "I defy all visions and dreams!" totally contradicting his idea he had just a few minutes ago.

When the fox does come to Chanticleer's house, you would think that after that dream, Chanticleer would have nothing to do with this fox. But once again, Chanticleer's pride comes into play. The fox knows he has a giant ego, and uses it to his advantage. He flatters the rooster, and tells Chanticleer what he wanted to hear. So Chanticleer comes out and the fox catches him in his mouth.

Chanticleer finally starts to understand what his pride is doing to him. He knows he can't do this again. But he uses the fox's tactics to his benefit by flattering him. He flatters the fox into opening his mouth and Chanticleer flies into a tree. The fox tries to tempt his pride again, but Chanticleer is starting to learn from his previous follies, and doesn't come down.