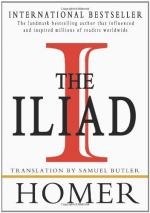 Homer
This student essay consists of approximately 2 pages of analysis of Achilles and Patroclus.

Summary: Discusses the emotional turmoil of Achilles in Homer's the Illiad. Describes how despite his immortality, Achilles was not immune to mortal pain.
Achilles was born of the goddess Thetis but also of a mortal man named Peleus. Because he was a god/mortal hybrid he was immortal except in his heel and was therefore immune to mortal pain. However like all humans he was not immune to emotional agony. This is demonstrated in Homer's Illliad when Achilles is afflicted with the death of his friend, Patroclus. He is plagued not only with the fact that he lost Peleus but also with the fact that Patroclus' death could be blamed on Achilles. Achilles also is emotionally struck with the fact that if he goes out and avenges his friends death and restores his and Patroclus' honor then he will die on the field of battle as is prophesized by the gods.

Patroclus' death could be placed on Achilles because although Patroclus begged Achilles to set aside his rage and fight against the advancing Greek army Achilles would not. Instead Achilles let Patroclus lead the Myrmidons into battle and fight off the mighty Trojans themselves. Not only by not fighting did he let Patroclus down but also the entire Greek army. If Achilles had fought, since he was the greatest fighter among the Greeks, he would have brought Troy to its knees and forced it to plea for its own survival instead of the opposite situation where Patroclus had to plead with Achilles to either save the greek army and their ships with him or to at the very least allow Patroclus to lead the Myrmidon's against the Trojans.

Patroclus' plea was at least heard by Achilles since Patroclus was the person dearest to Achilles. Patroclus was Achilles best friend and one can see that Patroclus was a skilled warrior but also a skilled human being in the sencse that he was kind, understanding, and compassionate. This is shown when the slaves that Achilles and Patroclus have captured mourn over Patroclus' death.