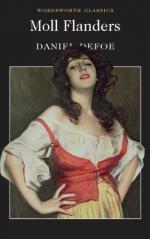 Summary: An essay discussing what makes Defoe a good story teller. Debates whether he was deceitful or honest, focusing on Moll Flanders.
"And after all, what is a lie? `Tis but

the truth in masquerade"

Moll Flanders, a potent character of Defoe's, is haunted by her past, and as such, is driven to tell her story. Many literary scholars believe Defoe intentionally mislead readers to believe that Moll Flanders was a real person. Defoe has therefore often been dubbed as a liar.

The dictionary definition of a lie is:

To speak untruthfully with intent to mislead or deceive (2)

Plots in other fictitious works, such as those by Shakespeare, were known as fiction due to their unlikely content, but in Moll Flanders it is harder to distinguish between fact and fiction. The debate begins when attempting to conclude as to why Defoe is a liar. Is it his realistic fiction or, as the dictionary definition suggests, his intent to mislead his audience"

More summaries and resources for teaching or studying Moll Flanders.