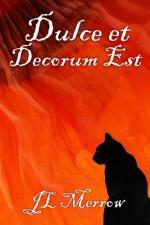 Summary: Analyzes the poem "Dulce et Decorum Est" by Wilfred Owen. Explores the World War I images invoked in the poem. Reveals how Owen disagrees with the notion of war being an honorable way to die.
The poem "Dulce et Decorum Est" is an anti-war poem by Wilfred Owen. It was written during the World War I when he was an officer in the British Army.

In verse one the first view of the soldiers invokes a very different image from what we usually imagine. In the first stanza Owen describes how the soldiers are trudging back to camp from battle.

We see the soldiers, fatigued and wounded, returning to base camp: Right off in the first line, he describes the troops as ragged beggars and than compares them to old women. Verse one expresses both the physical and mental condition of the soldiers and gives an idea of the extremely appalling situation of these wretched men. There is no joy for them even as they leave the battlefield.

From the first line of verse two the tone of the poem is changed. From...