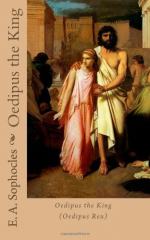 Get Oediupus and Free Will from Amazon.com
View the Study Pack
View the Lesson Plans
Related Topics
Oedipus at Colonus

Sophocles
This student essay consists of approximately 5 pages of analysis of Oediupus and Free Will.

Summary: Analyzes Oedipus the King, by Sophocles. Examines the issues of fate and free will. Provides a plot summary and includes supporting evidence from the text.
In Oedipus the King, many themes are shown, but the main theme is whether or not Oedipus had free will. Oedipus' life, as a whole, was predetermined; everything he did in between was up to him.

...With determinism, a man has a predetermined destiny and fate that absolutely cannot be altered by the man himself. Yet, it has been the desire of man to avoid the perils that his fate holds and thus he unceasingly attempts to thwart fate and the will of the divine. A manifest example of this was the infamous Oedipus of the Theban Plays, a man who tried to defy fate... (Suzuki).

Oedipus predominately had no free will, but there were some cases where he expressed it, but when he did, it was injuring his body.

"Oedipus is merely a puppet of the gods, doomed beforehand to a terrible fate." (Porter) Oedipus was prophesized...

Oediupus and Free Will from BookRags. (c)2021 BookRags, Inc. All rights reserved.