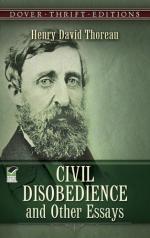 Summary: Analyzes the heritage of transcendentalism from Martin Luther King Jr.'s "Letter from Birmingham Jail" and from Throeau's "Civil Disobedience". Describe how each man's work parallels each other.
"I have almost reached the regrettable conclusion that the Negro's great stumbling block in his stride is toward freedom is not the white citizen's councilor or the Ku Klux Klanners, but the white moderate, who is more devoted to "order" than to justice."

"There are nine hundred and ninety-nine patrons of virtue to one virtuous man."

Civil disobedience is defined as the non-cooperation with government officers as a method of protest; but in reality, the effects of civil disobedience exceed this simple definition by great measures. In King's "Letter from Birmingham Jail," some of Thoreau's transcendental ideas are prevalent. In the letter, King recognizes the problem of segregation is hindered most by the white men who just want to "live in peace." Though Thoreau lived more than 100 years before the time of King, his thinking remained an influential legacy. Both "Civil...