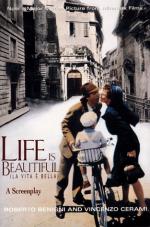 Get Life Is Beautiful, A Review from Amazon.com
View the Study Pack

Roberto Benigni
This student essay consists of approximately 2 pages of analysis of Life Is Beautiful, A Review.

Life Is Beautiful, A Review

Summary: Analyzes the Italian film, "Life is Beautiful." Describes the films major themes. Provides a plot summary.
The Movie Life is Beautiful is the first of its kind. It is unlike most of its kind because it gives us, the viewers, a completely different view of the holocaust. We see for the first time, The Holocaust being depicted in a comedic way, but the main message is still clear. That message being 'Never Give Up' In the first half of the movie, Guido Orefice, a Jewish waiter in the WWII era Italy is going at all lengths to win the heart of Dora, a non-Jewish school teacher. Although polite about it, she does not welcome his attempts at first, that is until she gets to know him. She soon realizes that she returns his love for her, and they get married. They soon have a son, who they very much adore - Joshua. All is well, and to them, life really is beautiful.

Their storybook life goes on until one day when Dora returns to an empty house on Joshua's Birthday, and everything changes. Guido and Joshua, with many other Jews, have been brought off to a Jewish concentration camp, but Dora requests to be brought along as not to be separated from her family. Guido wants to keep his son from being scarred by all of this, so he tells his son that it is all part of a game, and if he does what his father says, he will win a prize. Even when things begin to get really tough, and Joshua no longer wants to stay, Guido fins a way of raising his spirits and reminds him of the prize they are working for. And when things start to get Guido down, he still keeps on a happy facade in front of Joshua, and risks his life with acts to convince Joshua of the 'game' they are playing, such as when he made an announcement of the winning team over the loud speaker.

Guido always found a way of making things better for Joshua; he never did give up. Even though he did not make it in the end, for Joshua and Dora, life was better, they were happy again, because they were together.

More summaries and resources for teaching or studying Life Is Beautiful.

Life Is Beautiful, A Review from BookRags. (c)2022 BookRags, Inc. All rights reserved.