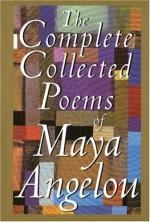 Get Maya Angelou from Amazon.com
View the Study Pack
Related Topics
Caged Bird
On the Pulse of Morning
Still I Rise

This student essay consists of approximately 2 pages of analysis of Maya Angelou.

Summary: Provides biographical data on American author and poet Maya Angelou. Describes her early life and struggles. Reviews her body of work.
Maya Angelou was born Marguerite Johnson in St. Louis, Missouri in the year of 1928. She lived mostly with her grandmother in Arkansas, and then moved to her mother's house in San Francisco after graduating with honors from Lafayette County Training School in 1940. When she graduated she gave birth to a son she named Guy, and then began numeral jobs, including a singer, poet, a civil rights activist, and a novelist. She, when writing, always tries to write stories that include courage, perseverance, acceptance, realization of ones full potential and also presents strong female role models. One of her most well known autobiographical books is "I Know Why the Caged Bird Sings" (1970) and how she tells about African American life with rhythm and texture.

In 1981, Dr. Angelou was appointed to a lifetime position as the first Reynolds Professor of American Studies at Wake Forest University. Maya Angelou had the honor of reading her poem "On the Pulse of morning" at the inauguration of President Bill Clinton in January, 1993. She has received many awards for her work, including Grammy Awards (1994 and 1996, for her recorded albums such as "On the Pulse of Morning" (1993), and "Phenomenal Women" (1995). In 1998 she became a director with the release of the motion picture, "Down in the Delta", which is about a troubled women who moves back to where her ancestors lived in the Mississippi Delta.

Maya Angelou is known as one of the great voices of contemporary literature and a wonderful renaissance woman. She still travels the world making appearances, always spreading her knowledge and wisdom to different people. She has the gift of captivating her audiences with fire and perception. She has the talent to let people forget about the race or class between reader and subject throughout her books of poetry and autobiographies.

More summaries and resources for teaching or studying Maya Angelou.