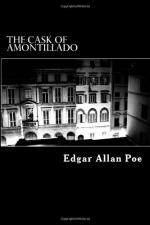 Get Edgar Allan Poe "The Cask of Amontillado" from Amazon.com
View the Study Pack

The Cask of Amontillado Essay | Essay

Summary: Analyzes the story, "The Cask of Amontillado", by Edgar Allen Poe. Provides a brief plot description and answers the question, Little is described about the motive causing Montresor to seek revenge on his friend, what does this add to the plot?
This story, "The Cask of Amontillado", by Edgar Allen Poe, is about revenge. The narrator, Montresor, had pledged revenge upon his friend Fortunato for an insult that was not described. Fortunato is unaware of his friend's intentions. They meet in the streets during a carnival and Montrsor lures his friend to join him. The intoxicated Fortunato follows Montresor down in the dark, damp catacombs under Paris is search of a fine amontillado. Winding and turning, deep through the tunnels, they reach a room line with bones. Montresor quickly chains Fortunato to the wall in the tomb. Slowly, enjoying the moments, Montresor seals the vault. When Montresor is placing the last stone in place, Fortunato begins to laugh thinking this is all a joke; however, Montresor ensures him it is not, seals the tomb.

Little is described about the motive causing Montresor to seek revenge on his friend, what does this add to the plot"

Edgar Allan Poe adds a twist of mystery and darkness when not describing Montresor's motive to take his friend Fortunato life. Montresor claims that the insult was so horrible that the only justification and response to these words is death, even if you are taking your friends life. Once more, the manner in which Montresor greats Fortunato is with "excessive warmth", then when killing him, letting his friend die slowly, in the darkness alone, shows hatred and a tremendous amount of anger. Because of Montresor's actions, the two different sides that you are reading, your have to question this characters sanity. Is he in his right mind when killing his friend over an insult, and what words would be so atrocious to take your friends life? I admit that there have been moments, when I wish evil things upon a person for treating me poorly. However, I do not believe that I have ever wished death upon a person over an insult. The worst thing I wished that would happen to someone for their fowl words was for them to break a bone, but never for death to creep up upon them. Furthermore, I would not even wish anything to break on a friend, or someone who was once a friend. Therefore, Edgar Allan Poe choice to leave out a motive allows this ambiguity and darkness to creep up on the reader, making this story of revenge horrifying.

More summaries and resources for teaching or studying The Cask of Amontillado.