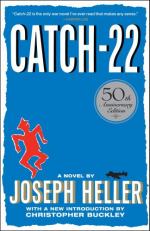 Get Catch-22, A Summary from Amazon.com
View the Study Pack

Joseph Heller
This student essay consists of approximately 2 pages of analysis of Catch-22, A Summary.

Summary: Summarizes the plot of Catch-22, by Joseph Heller. Details major characters and includes major plot points. Explains how the novel's title relates to the plot.
Catch-22 by Joseph Heller is a book about a quadrant of fighter pilots on an island of the coast of Italy during World War II. The book starts out with Yossarian in a Pianosa hospital fighting illness in order to escape flying dangerous missions. So, he gets a task to write letters to enlist people into the ward. To make time pass by quicker he plays a game by blocking out words on the letters to make the letters seem like love letters and signs it Captain Washington Irving.

Yossarian told the doctor that the rule is "to ground anyone who's crazy." The doctor than says that's a catch-22: "anyone who wants to get out of combat duty isn't really crazy." As the book goes on Yossarian has a lot of "meetings" with a lot of girls. Two of them are Dori Duz, "a lively little tart," and the Lieutenant's wife, Mrs.Scheisskopf, "a plump, pink and sluggish girl" who could not count to twenty-eight. Later, Yossarian asks a women named Luciana to marry him, but she didn't accept because she new he could marry someone who wasn't a virgin. As there making love Hungry Joe comes in and takes a lot of nasty pictures of them. When that happened she tolk off so Yossarian made love to the maid.

When the book keeps going Yossarian tends to hate Cathcart more and more for increasing the number of missions he said he flue and the number went from 40 to 70. When he was awarded a metal Yossarian showed up nude. Then he is seen naked during a funeral. Yossarian answers when people ask "Why are you naked" he reply "My clothes are soaked in blood, and swears he would never wear a uniform again."

As the book starts to turn Milo was found out, meaning people found out that he was in with the black-market. Then when they find out that he agreed to bomb there base then he was screwed. Yossarian at the end refuses to fly anymore missions. He boards a planes heading for Rome and he jumps......

More summaries and resources for teaching or studying Catch-22.