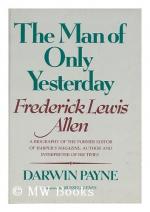 Get Only Yesterday from Amazon.com
View the Study Pack

This student essay consists of approximately 2 pages of analysis of Only Yesterday.

Summary: Essay provides a brief description of the story "Only Yesterday" by Frederick Allen.
The author of Only Yesterday was Frederick Lewis Allen. The setting of the story took place during the roaring 1920s. During this time a lot of things were going on in the world. This book starts out on November 11 (Armistice Day). It was early in the morning that day when all types of bells and sirens were going off because there was an announcement declaring that the war was over.

It was now the post war decade and people were in fear of The Big Red Scare, this was a time when there were anti-Bolshevic riots and the start of the Ku Klux Klan. The Big Red Scare only lasted for a short period of time. Now a new decade started when woman were changing their style of fashion and drinking alcohol with the men.

Some of these actions that the woman were doing did not seem "lady like". In the middle of the book the author talked about how the media was now a big part of Americans every day life.

There was all types of News Papers, magazines, and the radio. Out of all those types of media the radio was the most popular at the time, cause people could get the news, weather, or listen to the broadcast of a baseball game. At the end of the book the stock market had crashed causing Businesses and people to lose money, witch lead to the Great Depression.

The History I learned from this book was that the 1920s was a decade of war, politics, morals, and new ideas. I also learned about what kind of activities and stuff people were into during the 1920s.

I agreed with the major themes of the book, because they all went in order of how the events really happened. Another reason is because I liked how the author explained the book in such a way that you felt like you were actually there at the time of the roaring 1920s.

Only Yesterday from BookRags. (c)2021 BookRags, Inc. All rights reserved.