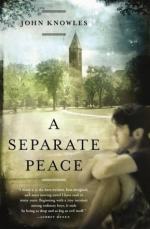 Get A Separate Peace Dialectical Journal from Amazon.com
View the Study Pack
View the Lesson Plans

Summary: It gives quotes taken form the text and puts them under a conflict category. Then it explains the quote as well as its meaning.
Quotations From Text

"This tree flooded me with a sensation of alarm all the way to my tingling fingers. My head began to feel unnaturally light, and the vague rustling sounds from the nearby woods came to me as though muffled and filtered. I must have been entering a mild state of shock" (8-9).

"I had never done ten of them. At the twelfth I discovered that he had been counting to himself because he had begun to count aloud in a noncommittal, half-heard voice. At eighteen there was a certain enlargement in his tone, and at twenty-three the last edges of boredom left it; he stood up, and the urgency with which he brought out the numbers was like an invisible boost lifting me the length of my arms, until he sang out, "thirty!" with a flare of pleasure" (108-109).

"Quackenbush had clamped his arm in...