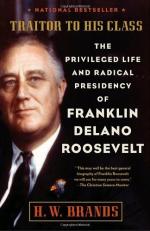 Get Roosevelt's Background and Understanding of the American People from Amazon.com
View the Study Pack

This student essay consists of approximately 2 pages of analysis of Roosevelt's Background and Understanding of the American People.

Roosevelt's Background and Understanding of the American People

Summary: Essay describes how Roosevelt's upbringing, background and character made it easy for him to understand the concerns and fears of ordinary Americans.
In one way, Roosevelt's character did not help in understanding ordinary Americans. Some people argue that he was a spoilt, protected boy because he was a single child and came from a very rich WASP family. His privileged background was related to preceding presidents; F.D Roosevelt had been a distant cousin of Theodore Roosevelt. He was a single child, and he had lots of facilities available, including holidays to Europe, the ability to practice all sorts of sports and had a skill in hunting. Even though he had a serious personality, Roosevelt was a popular member of parties and social gatherings with ladies. In fact, he was almost like a rich " ." His education had certainly been private and of the highest quality, and even in those times, he had the opportunity of learning two languages. The Roosevelt's were a wealthy family and often, home tutors educated Roosevelt until attending Groton School at 14. He was a successful student and did well at Harvard University, one of the top two rich privileged universities, and Columbia Law Schools, before being admitted to the New York bar in 1907. Roosevelt later married into another rich family, probably even of a higher standard than his and did not therefore need to work or even finish his studies at university

In 1905 Franklin married his cousin, Eleanor Roosevelt. Her father, Elliott Roosevelt, was the brother of Theodore Roosevelt who had been president of the United States from 1901 to 1909. Like her husband, Eleanor was a democrat and took a strong interest in politics. Roosevelt, however, found it difficult to finish university and a lot of the time; he avoided doing anything he didn't like. He was an idealist and a dreamer, and his ideas were often unrealistic. His thoughts lacked real direction yet he moved from one idea to another very quickly and tended to compromise. He found it difficult to follow things through, and what ordinary people wanted and related to be day-to-day ideas.

Roosevelt's Background and Understanding of the American People from BookRags. (c)2022 BookRags, Inc. All rights reserved.