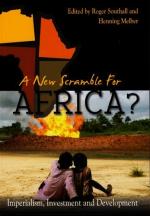 Get Imperialism in Africa from Amazon.com
View the Study Pack

This student essay consists of approximately 2 pages of analysis of Imperialism in Africa.

Summary: As Europeans were taking over Africa there were positive and negative aspects of European imperialism. This essay will reflect the impact to the African people who were introduced to industry during the 19th century.
Imperialism

"If it be friendship that you desire, then I am ready for it...but to be your subject, that I cannot be." The famous quote of Chief Machemba (letter to Herman Von Wissman), as he and his tribe resisted European conquest. As Europeans were taking over Africa there were positive and negative aspects of European imperialism.

Imperialism caused some positive aspects in Africa. For example, missionaries caught attention of the African people by showing their generosity and their ways of Christianity. "They built schools and medical clinics along churches," (pg 320 World History). This suggests that, when clinics were opened Africans received health benefits but also education. "[Over] 800 different languages" approximately known during 1870's and only 5 common languages were soon spoken by many Africans because of the missionaries who opened up schools along churches. In addition, imperialism "also brought jobs and industry to the colonies [and it] introduced the ideas of constitutional government to the Africans," (pg 578 AGS World History).

Imperialism caused major negative aspects in Africa. In this case, Africans felt "they that Europeans got more of imperialism than they did," which suggests labors were treated as slaves. " The first step towards whiteness" (History Alive), this is a racist comment from an advertisement. The Europeans saw themselves as superiors over those who are not civilized. Furthermore, "[Europeans] tried to change the religion, the language the way of life of these colonized people," (pg 321 ASG World History). This shows that Europeans had little respect for native culture and customs. In addition, "the colonial people had no control over their government or their country's resources," this suggests that a revolution or war could of easily started at any moment. So there was constantly conflict between the nations of Europe.

In conclusion, European imperialism caused positive and negative aspects. In a positive perspective, Africans were introduced to civilization and industry. As to the negative point-of-view, Europeans nearly destroyed Africa and themselves including.

More summaries and resources for teaching or studying Scramble for Africa.