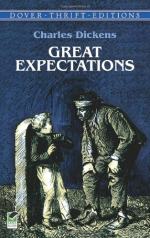 Charles Dickens was born on February 7, 1812 in Portsmouth, England. Dickens wrote Great Expectations during the Victorian Era and the Industrial Revolution. Factories were replacing farms as a means of occupation. In the factories the workers lived in horrible conditions. Children were often used in the factories because they required less pay and could maneuver around the machinery better. Charles Dickens grew up in a large household and his parents spent money they didn't have. This led to Dickens being pulled out of school and having to work in a bottle factory to support his family at a young age and to his father being placed in debtor's prison, leaving Charles alone in London. Dickens wrote Great Expectations because he grew up in poor conditions and was familiar with the marshes around Kent and the back streets of London. Pip is much like Dickens in respect...