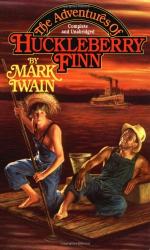 Get The River in Huck Finn from Amazon.com
View the Study Pack
View the Lesson Plans

Mark Twain
This student essay consists of approximately 2 pages of analysis of The River in Huck Finn.

The River in Huck Finn

Equality also made a good friendship between Jim and Huck. Huck treated Jim as a white man, not as a slave. When Jim was talking about his family and how he misses them, and once he was free, he was going to buy them out of slavery. When Jim said this, Twain quoted that Huck thought of him as an equal. Jim is a loyal, trustworthy person that desires to be treat with respect. Despite his color, Huck never talks down to Jim. Traveling down the river made Huck think of Jim, not just as a slave, but as a human being.

Traveling down the river, being together day after day, it's surprising that Jim and Huck didn't get sick of each other. They were never apart as they made their journey to the free land. Everyday their friendship grew stronger and stronger. Huck treated Jim as an equal and cared about him so much. When Jim was missing, Huck became very upset and just wanted him back. Also, when Jim saw Pap in the boat, he wouldn't let Huck see his dead father lying there because Jim cared about him too much. Huck and Jim have a friendship that will last forever. The river played a key role in Huckleberry Finn. It symbolized freedom, equality, and friendship. Without the river, there would be no real point of the book.

The River in Huck Finn from BookRags. (c)2021 BookRags, Inc. All rights reserved.