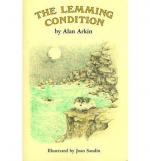 Get The Lemming Condition by Alan Arkin from Amazon.com
View the Study Pack

This student essay consists of approximately 2 pages of analysis of The Lemming Condition by Alan Arkin.

The Lemming Condition by Alan Arkin

Summary: A plain report on the book, The Lemming Condition, by Alan Arkin.
The Lemming Condition is by Alan Arkin and is about a little lemming called Bubber. Something was troubling Bubber one morning, but he didn't know what it was. He asked his sister, and her answer made him feel very forgetful. They were doing that thing where all of the lemmings jump off the cliff into the ocean. Bubber had no problem with this until his friend asked him if lemmings could actually swim. He did not really know the answer, but Bubber blew his friend off anyway. Bubber wandered off in search of an answer, and he found a very old and wise lemming who gave him his answer.

The conflict is that no one knew if lemmings could actually swim. Everything was fine until Bubber's friend Crow asked if lemmings could actually swim. Bubber started wondering if lemmings actually can swim. He asked his parents and they said, "Of course we can swim." But Bubber wasn't convinced. He got his good friend Crow to give him a ride to a little pond. It ended up that he couldn't swim. In the meantime he met a wise old lemming who said that jumping off a cliff is all nonsense.

The resolution occurs when Bubber tried to stop the other lemmings from jumping off the cliff. But he couldn't. They were all hypnotized, and he couldn't stop them. The lemmings just kept falling down like a waterfall. It looked as though Bubber was the only lemming left alive. But then all of a sudden, other lemmings started popping out of their holes a couple at a time. He was not the only survivor, and he could help get the lemming population back up. There was new hope for his future and the future of other lemmings.

More summaries and resources for teaching or studying The Lemming Condition by Alan Arkin.