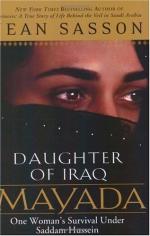 Get Another One Blown to Dust - Saddam Hussein from Amazon.com
View the Study Pack

This student essay consists of approximately 2 pages of analysis of Another One Blown to Dust.

Another One Blown to Dust - Saddam Hussein

Summary: Essay about Saddam Hussein and Iraq.
Saddam Hussein has not really cared about the country he governors. Before Saddam came to power, Iraq was a thriving country with schools and hospitals and jobs. Now, The schools, that are still running, are not taken care off, the hospitals are unable to get medicine, And most peoples jobs are selling things on the street. As for the economy, that has slipped away to almost nothing. If we go to war with Iraq, he could destroy what is left of the economy by blowing up the oil wells.

First, Saddam blew up the oil wells in the Persian Gulf War. He did not care what it took, or how to do it as long as he won. He used the burning oil wells as a distraction to attack or retreat. If he did not care then if he destroyed his own country's economy, why would he care now. In addition, he could use the oil wells as a type of weapon to kill solders or destroy equipment that gets to close.

Secondly, almost everyone around the world (except for Iraq) think Saddam is a lunatic. Well, "lunatics" think things that that sometimes are not true. If we go to war, he might think that the war is only about the oil, thus making he think that if he blows up the oil wells, and having the US surrender. In addition, being a "lunatic", he might also think that if he cripples the economy, the US will not want to take over.

Lastly, Saddam could care less about Iraq's economy as long as he keeps getting money. He would even destroy the economy if he thinks that will win the war. As stated before, Saddam blew up the oil wells when he was in the Persian Gulf War. What's to stop him from doing that again"

In conclusion, my opinion is that if a war is started with Iraq, Saddam Hussein will blow up the oil wells if he thinks that will win him the war.

More summaries and resources for teaching or studying Saddam Hussein.

Another One Blown to Dust - Saddam Hussein from BookRags. (c)2021 BookRags, Inc. All rights reserved.