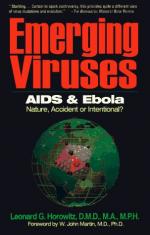 Get Ebola Virus from Amazon.com
View the Study Pack

This student essay consists of approximately 2 pages of analysis of Ebola Virus.

Today, in many poor countries, especially Africa, there is a battle being fought against a deadly virus called the Ebola Virus. The Ebola Virus was originally named after the Ebola River in Congo. The first victim of the Ebola Virus is thought to be Esther Awete Scientists have yet to say the origination of the Ebola Virus, which affects monkeys as well as humans. So far, the Ebola virus has taken more than 500 lives in Uganda alone, most of which came from the outbreak that occurred in 2000, which ended up in over 400 cases. The Ebola Virus usually occurs in poor countries, although there have been uncertified reports in Texas. Symptoms of the Ebola Virus include fever, weakness of muscles, muscle pain, headache and sore throat to start out. Vomiting, diarrhea, rashes, limited kidney and liver functions, and internal and external bleeding follow this. The symptoms last for 2 to 21 days. Victims can die of bleeding in mere days. Victims are also dehydrated. The Ebola Virus is transmitted by direct contact with blood, any kind of body secretions, semen, or organs of infected people. The Ebola Virus can also be transmitted through dead people who died of the virus, which is why victims that die of the virus are quickly buried, but usually cremated. Even with our advanced technology, a cure for the Ebola Virus has yet to be found. Doctors from the World Health Organization were sent to Uganda were sent to try and contain the virus. They have begun isolating all people with any signs of the fever. The Lord's Resistance Army is a refuge for anyone who is fleeing from the sites of the virus. Doctors believe that the best hope for the people in Africa in time of outbreak is to let the fever take its course on victims, since the Ebola virus kills faster than it can be transmitted.

More summaries and resources for teaching or studying Ebola.