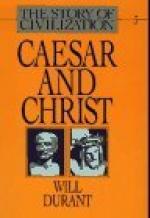 Get Why is sextus a pest? from Amazon.com
View the Study Pack

This student essay consists of approximately 2 pages of analysis of Why is sextus a pest?.

Why is sextus a pest?

Summary: This essay is about a kid in Roman times and his struggles. Right out of Ecce Romani.
Why is Sextus such a pest"

Now it is the 9th hour. The carriage was still not movable in the ditch. Sextus is bored to do nothing for the boy is energetic. Suddenly he therefore runs towards the carriage and opens the trunk. At that moment he pulls out of the chest a ball.

"Do you want to play ball"" he shouts. He throws the ball towards Marcus immediately. Marcus catches it and sends it towards Sextus. Again and again the boys kept throwing the ball to each other. At that moment Sextus who often wants to annoy Cornelia. As a joke he throws a ball and hits Cornelia.

"Come with me dearest" responds her mother and she hugs her daughter. "Sextus hits you because he did not intend to hit you. He is an energetic boy and he is reckless, the boy is not always annoying.

"But why is Sextus living with our home"" asked Cornelia who is still angry. "Why does the father of Sextus send him away""

"What about Sextus' mother? " asks her daughter, "why does she not take care of her son""

"Alas" replies Aurelia, "Sextus' mother as you know is now dead. Sextus does not have a mom"

Cornelia goes silent. She is no longer moved by anger. However at that very moment Sextus yelled out "want to play with us Cornelia? Although you are a girl, perhaps you are able to throw a ball." While yelling now smiling and fleeing Cornelia is angry again. " Go away you annoying boys" she shouts, "don't play with the ball!"

More summaries and resources for teaching or studying Roman Empire.

Why is sextus a pest? from BookRags. (c)2022 BookRags, Inc. All rights reserved.