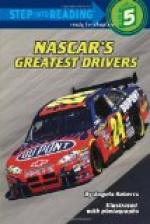 Get NASCAR Historical Information from Amazon.com
View the Study Pack

This student essay consists of approximately 2 pages of analysis of NASCAR Historical Information.

Summary: A history of an American sport, NASCAR.
When most people think of the Daytona 500 (the Great American Race) they think of a celebration or a triumph more than a tragedy or an upset. Well in this years race a serious accident has taken place. Dale Earnhardt Sr. age 49, has passed away. "Most people think this was a freak accident, but the truth is, is that if he had been wearing the HANS (head and neck safety-restraint) and he had been wearing a non-faulty seat belt he would have had a better chance of living" quoted Dr. Steve Bohanon. The seat belt tore right in the left shoulder area, which sent the left side of his body jerking to the left and his spinal cord connecting to his brain was severed.

There were several other accidents that drivers may have lived through if they were wearing the HANS device. The unfortunate young drivers were Adam Petty 19, Tony Roper 35, and Kenny Irwin 31. I believe that NASCAR should and will change the rules in the very near future. They have announced a new research team for NASCAR. Their goal is to prevent any more fatal injuries due to faulty equipment. And another issue that they are looking into is soft walls. The walls NASCAR uses today are hard concrete. They need to use some kind of soft material to prevent any more injuries.

At Daytona and Talladega (the two fastest NASCAR tracks) the cars may reach 195 Mph. Very much like Earhardt's crash, many more drivers may do the same thing. (185 Mph into the wall) They are trying to slow the cars (less speed = less injuries) down more by making the spoiler angle a minimum of 70º instead of 50º. Another attempt to decrease speed is to lower the front air dam. It used to be ¼ an inch off the ground now it is ½ an inch off the ground. No matter how hard NASCAR tries this sport is and always will be dangerous.

Every Sunday these drivers go out on these tracks and risk their lives. Every Sunday millions of fans watch these dangerous races. And these drivers do not know what is going to happen, so when "The Big One" strikes all the drivers can do is sit back and get ready to go for a ride.

More summaries and resources for teaching or studying NASCAR.