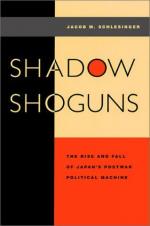 Get Political Machines from Amazon.com
View the Study Pack

This student essay consists of approximately 1 page of analysis of Political Machines.

Summary: Political machines and the turn of the 20th century
Political Machines

A new group of leaders arose out of the midst of chaos. They appeared nice and helpful to everyone. They help out and clean up the streets. But all this poses one giant question; are political machines what they seem to be"

Political machines are well organized structures. They're built like pyramids with many precinct captains at the bottom, a few ward bosses in the middle, and finally at the top is the city boss. The city boss is usually the most powerful man in the city. He controls all municipal jobs including: police, fire, sanitation, and public works. The boss was not always the mayor but he did control the courts and all licensing. Many bosses built things to better the city like hospitals and schools. When constructing projects like this they would usually receive kickbacks from the construction boss. A kickback is when you ask a builder to over charge you then pay you the extra back personally.

Some bosses received so many kick backs that they became quick millionaires. One of the most famous bosses for this was Boss Tweed. His kingdom was New York and his palace was Tammany Hall. There was one particular instance where he received a kickback of almost eight million dollars for the construction of a new city hall.

More summaries and resources for teaching or studying Political machine.