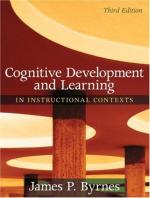 Get Major Challenges to Piaget's Theory of Cognitive Development from Amazon.com
View the Study Pack

This student essay consists of approximately 8 pages of analysis of Major Challenges to Piaget's Theory of Cognitive Development.

To answer this question, Piaget's theory of development should be explained along with Vygotsky's theory and the connectionist theory of development, and then each should be compared with the others. Once this has been achieved the main similarities and differences will be summarized, and finally the areas of Piaget's theory that have not been undermined by other theories will be reiterated.

In Piaget's opinion, Intelligence is not how we would class it today, he believed that intelligence covered all mental thought. He did believe however that the development of intelligence was an evolutionary matter not something that could be built on after birth, only used. Piaget believed that the child was responsible for its own development and therefore teaching could be seen as defunct.

In Piaget's development theory there is four...

More summaries and resources for teaching or studying Theory of cognitive development.