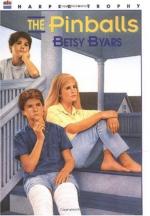 Get The Pinballs Betsy Byars from Amazon.com
View the Study Pack

This student essay consists of approximately 2 pages of analysis of The Pinballs Betsy Byars.

Summary: This essay is about the book titled The Pinballs by Betsy Byars.It deals with the topics of foster care and how the foster children refer to themselves as pinballs bouncing from one home to another.
The Pinballs

I have read your book titled The Pinballs. I enjoyed reading this book. You wrote about the characters like they were real people. That made the book more enjoyable.

My favorite character was Carlie. I like her because she was kind of like me. For example, when we first meet someone we would get an opinion about them but later realize that they aren't that bad and they can become good friends. I also like Harvey because even though Carlie was always mean to him and made fun of him, he would still be nice to her. Thomas J was like a friend of mine because they are always honest with everyone and always say what they feel.

My favorite scene was when everyone first met. I like this scene because that is where everyone first met and when they found out about each other. This was a good scene because that is when everyone would get to know the kids they would be living with for the next few years. My least favorite scene was when I read that Carlie's mother didn't want to take her back into her house. I felt sorry for Carlie because she was always writing letters to her mother asking if she could come back home and her mother said she didn't think it was a good idea.

My reaction to the end of the novel was that I thought Carlie made a good statement she said "as long as we are trying, we are not pinballs." By that I think she meant that as long as they were trying to make a good life for themselves wherever they are, they will never be balls just bouncing around. I really enjoyed this book and I recommend it to anyone because it is really enjoyable.

More summaries and resources for teaching or studying The Pinballs Betsy Byars.