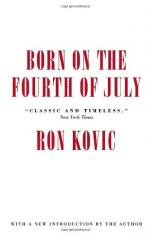 Get Self-Induced Misery from Amazon.com
View the Study Pack
View the Lesson Plans

Born on the Fourth of July Essay | Essay

The Vietnam War was a brutal time for Kovic. He witnessed the loss of many lives, and he took pride in taking his enemies'. He considered it one of the greatest events of his lifetime, for he was able to fight with pride for his country; however, after suffering his own wounds and seeing innocent children die, he began to regret ever wanting to take part in the war. The images of the children shot, suffering, and dead would be inscribed within his head for eternity:

The floor of the small hut was covered with them (small children),

screaming and thrashing their arms back and forth, lying...