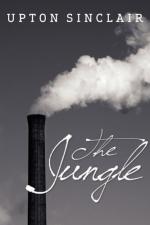 Get The Jungle from Amazon.com
View the Study Pack
View the Lesson Plans

Upton Sinclair
This student essay consists of approximately 5 pages of analysis of The Jungle.

The novel "The Jungle", is a hybrid of history, literature, and propaganda. It was written in 1906 by Upton Sinclair, to demonstrate the control big business had over the average working man, and his family. Sinclair was one of the most famous muckrakers in history; he exposed scandals and political corruption in the early nineteen hundreds (Literature 572). He attempted to show his idea of the solution to this problems of the times: socialism. At the time Sinclair wrote, communism was not yet around, so the anti-socialistic fears were not yet aroused.

The socialist party, to which Sinclair belonged since he was twenty-four, was moderately popular in certain areas (Literature 572). The American people were, in a way, open to the suggestion. As the title proposes, the novels is meant to show how American economic power had led big business, trusts, and incorporations to...

The Jungle from BookRags. (c)2021 BookRags, Inc. All rights reserved.