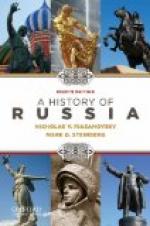 Get Russia's Class Division in the 1800's from Amazon.com
View the Study Pack

This student essay consists of approximately 2 pages of analysis of Russia's Class Division in the 1800's.

Russia's Class Division in the 1800's

Summary: Evaluates Russia in the 1800's and their two class system.
During the 1800's, Russia consisted of only two classes of people. The majority of the people were poor peasants. Approximately eighty percent of Russian people were peasants. No middle class existed at all. There were a few wealthy nobles that owned all lands in Russia and they bought and sold peasants to work it for them.

Before the Russian Revolution took place, serfs were forced to live a rough life. All industry of the country was agricultural, even though other European nations were already in an Industrial Revolution. Everyone who didn't own some land was a serf, forced to work for a noble. Once someone was a peasant, there was no way for them to change and they would stay a peasant for the rest of there life. A child of a peasant would also become a peasant and their child and so on. There was no education that could inform them that a different lifestyle was out there. They knew nothing other than working the estates for the rest of their lives. This was why some educated sons of nobles believed that ending serfdom was the first step to revolution. With eighty percent of Russians changing what they do with their life, revolutionists felt they had a much better chance. The peasants believed these same things. With an autocratic czar still in power however, there was no way for them to make changes.

Being only two classes of people in Russia, the lower class was bound to be poor. Peasants had no power socially and they also had no power economically. Peasants were treated like property. They could be bought and sold in open markets by nobles. Everything they worked for went back to the estate owners, they were unable to make any profit for themselves. The nobles had complete control over them. The landowners could beat the surfs or exile them to Siberia, anything they wished. Before revolution could have happened, the serfs needed some freedom.

The majority of Russians before revolution were forced to poverty. They wanted chance, but could find no means to obtain it. Even some sons of nobles believed something needed to be done. It was these reason that a revolution did take place.

More summaries and resources for teaching or studying History of Russia.