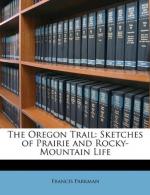 Get The Oregon Trail from Amazon.com
View the Study Pack

This student essay consists of approximately 2 pages of analysis of The Oregon Trail.

Summary: Opinion about the Oregon trail adventure.
Having not really remembered much about the history of The Oregon Trail, I was highly impressed and moved by such an intriguing story. I fully believe that The Oregon Trail was much more than a pathway to the state of Oregon. The places we now know as Washington, Oregon, California, Nevada, Idaho and Utah would probably not be a part of the United States today were it not for the Oregon Trail. Understanding that the pioneers fully believed and dreamed of a better life, gives me a since of admiration for taking on such a risk towards themselves, their families and their friends.

The journey west on the Oregon Trail was exceptionally difficult. One in 10 died along the way; many walked the entire two thousand miles barefoot. One of the real enemies of the pioneers was disease. I believe that if those conditions and challenges were faced by most of us Americans today, we would fail tremendously. Becoming so dependent on the modern conveniences would wreck havoc on such a journey.

It would be hard for me to narrow down the remarkable experiences by Ms. Palmer to only one that was impressive. Taking an eleven-year-old child and expecting him or her to take on responsibilities that most adults today will never face, is significant in itself. However, knowing children today, I think one of the things that really impress me about Ms. Palmer's journey is that fact that although she was faced with immense amounts of conflict, she handled it the best that she knew how. Put that situation in the life's of many people living in today's world, no one would have been able to make the best of a horrible situation. It is not the way things are dealt with, between complaining or pushing responsibility off onto someone else, we would be lucky to make it on such a hazardous journey.

In reading this story and the textbook accounts of what happen, I will honestly say that my perception has changed. Frankly, I have taken on the out of site, out of mind position, however after reading this amazing account, first hand, I am intrigued, and have a renewed amount of respect for these people.

More summaries and resources for teaching or studying Oregon Trail.