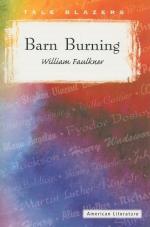 Get Barn Burning from Amazon.com
View the Study Pack

The thesis for barn burning is that when you are growing up you begin to change and look at things at a different perspective.

In the story "Barn Burning" Sarty starts out by having to lie for his father even though he knows it is wrong and throughout the whole story he has many conflicts with his father. Through all of these conflicts Sarty begins to mature into a man. He realizes that his father was at war and a war that his father fought on his own. Sarty respected his father and was behind his father all the way.

At the beginning of the story Sarty first step toward maturing is family support and pride. During the trial of Sarty's father, Sarty was called up to the stand to be questioned. When Sarty was walking toward the stand his father did not show Sarty any...