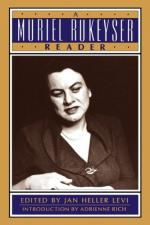 Get Muriel Rukeyser from Amazon.com
View the Study Pack

This student essay consists of approximately 1 page of analysis of Muriel Rukeyser.

Born in New York in 1913, Rukeyser came from affluent parents.  She attended Fieldston School, Vassar College and Columbia University.  In the early 1930's, she co founded a literary magazine.  Her first book of poems, Theory of Flight, was chosen for publication in the Yale Series of Younger Poets.

A social activist and feminist, Muriel's other books dealt with social injustices in America.  She gave birth to a child in 1947.  Details of the relationship between Muriel and the child's father are sketchy.  She taught at both the California Labor School, and later at the Sarah Lawrence College.

Boy with His Hair Cut Short is about a boy who has his sister cut is hair.  They must not be well off.  She reassures him that his hair will grow out.  He must be off to look for work.  More of a Corpse than a Woman seems to be pretty pessimistic if I'm interpreting her words correctly.  It sounds as if life was only enjoyable by these women when they were young.  The excerpt from Letter to the Front talks about Judaism and reminds those who are Jewish that it is a gift.  Her other poems seem to be about sexuality, and possibly Rukeyser's as well.

More summaries and resources for teaching or studying Muriel Rukeyser.