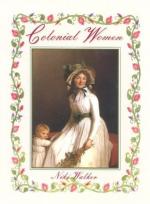 Get Regional Differences during American Colonization from Amazon.com
View the Study Pack

This student essay consists of approximately 2 pages of analysis of Regional Differences during American Colonization.

Summary: Essay on the regional differences during the colonization period of the U.S.
Written for A.P. US History
The continuation colonization in different parts of America in the 17th century brought changes in many different ways. The northern, middle, and southern colonies had different climatic, religious factors that influenced these changes. Among the most differed are agriculture, economy, and social structure. The southern, middle, and northern colonies differed from each other extensively.

Due to different climatic and regional factors, agriculture was quick to differ. The southern colonies mainly grew tobacco, rice, and indigo, while the middle colonies were successful growing grains, wheat, barley, eats, rye, and buckwheat. The middle colonies quickly earned the nickname, "the bread colonies." This all the while the northern colonies only were able to sustain small and diversified farms and crops.

The result of the lack of northern agriculture was an increased need for trade. The northern colonies sustained trade with the Indians and with Africa (known as the Triangular Trade). New England merchants traded such items as fish, barrel staves, and grains for molasses, fruit, spices, and slaves. Also, the increasing amount of trade resulted in greater piracy of the seas. The south had a one-crop-economy, which constantly fluctuated with supply, demand, and climatic factors while the middle colonies remained neutral with their crops and livestock.

The south struggled most with their social structure. They were short of hands, and were forced to begin buying or trading for slaves to work on their large plantations. Also, since settlements were set so far apart, no formal educational institutions were prevalent. Unless a family was wealthy enough to afford a tutor, there was no formal education in the south. The middle colonies struggled with education also, but it was easier to send youth to boarding schools in New England. The northern colonies were mainly well schooled, prosperous, and the people were healthy and long-lived. This was due to the organized and relatively successful governmental structure put into place.

Obviously, the colonies differed extensively from each other in many different ways. The agricultural, economic, and social differences are just ones thought to be the main three. There are many other extensive reasons why, and how they differed. One thing is for sure, these differences would result in conflicts in the future, and would eventually shape what is modern-day America.

More summaries and resources for teaching or studying Colonial America.