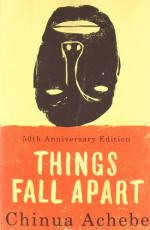 Get Okonkwos as a Tragic Figure in Things Fall Apart from Amazon.com
View the Study Pack
View the Lesson Plans
Related Topics
There Was a Country

Chinua Achebe
This student essay consists of approximately 2 pages of analysis of Okonkwos as a Tragic Figure in Things Fall Apart.

Okonkwos as a Tragic Figure in Things Fall Apart

Summary: How Okonkwos life was a tragedy both physically and mentally in Things Fall Apart by Chinua Achebe.
Chinua Achebe's book Things Fall Apart is a very tragic novel.  There was an unhappy ending because Okonkwo died and the Umofian culture broke down and Okonkwo couldn't do anything about it.  Okonkwo's tragic flaw was that he was so driven for success that he eventually killed himself.  The book was also tragic because the white man came bringing their customs and they took over the Umofian customs.

Okonkwo's father was a very unsuccessful man and he died heavily in debt. Okonkwo didn't want to be like his father, that's what drove him for success.  Okonkwo's hard work ethic brought him success in farming and wrestling.  When he was old enough, people gave him some yam seeds.  Okonkwo worked very hard for good yams and eventually paid back the yam seeds. He was also a very good and well-respected wrestler.  "His fame rested on personal achievements.  As a young man of eighteen he had brought honor to his village by throwing Amalinze the Cat...Okonkwo was as slippery as a fish in water."(Pg. 1)

Okonkwo's first tragedy was when he killed Ikemefuna.  Then when Ezeudu died, everyone came together to celebrate his life, and Okonkwo's accidentally gun went off and killed Ezeudu's son.  He was banished for seven years.  He was forced to run away to his mother tribe Mbanta.  While in Mbanta, the white men started to move into Africa.  They brought religion, weapons, and government to Umofian.

When Okonkwo went back to Umofia they had already started a school and a government.  The Egwugwu acted against some of this.  Okonkwo wanted to fight the white men but nobody else in the tribe was behind him.  After he killed a messenger, no one backed him up. The local government searched for him and found he hanged himself.  This is a tragic flaw because he took the cowardly way out just like his father would have.

There are also several forces beyond his control.  Like when the white man came and lured kids into their religion and there was no one to carry on the tribe's traditions.  Then nobody wanted to fight them.

Things Fall Apart was a good book.  I liked the way Chinua Achebe used lots of tragedy to enhance the novel.