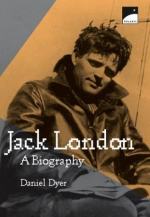 Get The Life of Jack London from Amazon.com
View the Study Pack

Daniel Dyer
This student essay consists of approximately 2 pages of analysis of The Life of Jack London.

The Life of Jack London

Summary: Details about the life of Jack London from birth to death. It reads a bit like an encyclopedia entry.
Jack London was born on January 12, 1876 and died on November 22, 1916.  London was a short-story writer and a novelist.  All of his work was based on struggles for survival.  These struggles were for both humans and animals.

London grew up in Oakland, California.  Jack never knew his father because he left Jack's mother right before he was born.  At the age of 14 Jack quit school to escape poverty.  He explored San Francisco, and worked for the government fish patrol.

In 1894, he worked with a group of militant workers who were protesting about working conditions across America.  He traveled with them until they reached Missouri, were he became a hobo and traveled the country.  At Niagra Falls he was arrested for vagrancy but was released after 30 days in jail.  He quickly caught a train back to Oakland.

More summaries and resources for teaching or studying Jack London.

The Life of Jack London from BookRags. (c)2021 BookRags, Inc. All rights reserved.