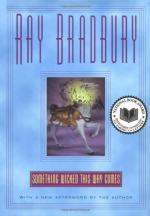 Get The Weapons of Good Used Against Evil in "Something Wicked This Way Comes" from Amazon.com
View the Study Pack
View the Lesson Plans
Related Topics
A Medicine For Melancholy and Other Stories

Ray Bradbury
This student essay consists of approximately 2 pages of analysis of The Weapons of Good Used Against Evil in &quot;Something Wicked This Way Comes&quot;.

In the third part of Something Wicked This Way Comes, the evil forces behind Cooger and Dark's evil carnival are finally defeated. They are done in by Charles Halloway's discovery that in the battle between good and evil, our best weapons come from good.

Charles Halloway kills the Dust Witch by shooting a wax bullet at her on which he has carved a smile- "The crescent moon I have marked on the bullet is not a crescent moon. It is my own smile. I have put my smile on the bullet in the rifle." (185). He tells her this with his smile, and she is instantly defeated. The carnies prey off of hated and sorrow, as they have for centuries. When they are faced with happiness and laughter- the antithesis of what they are used to, they cannot function.

The mirror maze is another thing that Charles ruins. He and Will are inside its confines searching for Jim. The images they see in the maze briefly threaten to paralyze Charles, and Will lights a match so they can see. Will sees his father in the lights, grabs him by the shoulders, and yells- "Oh Dad, Dad, I don't care how old you are, ever! I don't care what, I don't care anything! Oh, Dad...I love you!" (190). Though the mirror maze frightens Charles, it is his son's faith in him that restores his strength and confidence. He remembers himself and laughs aloud. The mirror maze shatters and frees them.

Charles' power is knowledge of how the carnival works. He knows his strongest weapon against the forces of evil is not believing that the evil can harm him. All of the power that evil has stems from fear- and laughter is the opposite of fear, and therefore its enemy.

The Weapons of Good Used Against Evil in "Something Wicked This Way Comes" from BookRags. (c)2022 BookRags, Inc. All rights reserved.