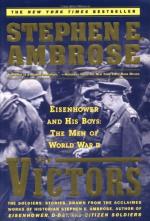 Get World War II from a Japanese Soldier's perspective from Amazon.com
View the Study Pack

This student essay consists of approximately 2 pages of analysis of World War II from a Japanese Soldier's perspective.

Summary: World War II from a Japanese Soldier's perspective
I have just turned 18 when I was drafted to the
Japanese army. Japan had brought the United States
to help them in concuring China in the 1930's. Even
though Japan brought the U.S to help the U.S instead
turned its back on Japan banned Japan from war mat-
erial. This made my country leaders very angry, but
they were determined to get our land back. All my
country wants is an Japanese empire and is willing to
pay any price. It was horrible to see Chinese civilians
being tortured and Killed. And the Americans saw what
was happing and therefore put an end to it. Even
though we were figthing the Americans, I was happy
when the brutality that was happening to Chinese was
put to an end.

The Leaders of Japan were not happy and therefore
began to send...