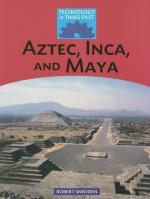 Get Incan Technology from Amazon.com
View the Study Pack

This student essay consists of approximately 1 page of analysis of Incan Technology.

Summary: This essay about the ancient civilization in south America, the Incas.  It deals with the technology advancements including medicine and towns built on the Andes mountain and the "Incan bees."
The legacy left behind by the Incas was the technology they used.

The technology used by the Incas was far beyond its time.  Examples of this are the cities in the Andes Mountains, the "Incan Bee"(

More summaries and resources for teaching or studying Inca Empire.