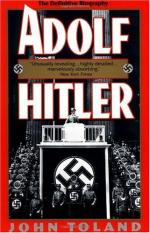 Get Fundementals of Leadership in Nazi Germany from Amazon.com
View the Study Pack
View the Lesson Plans

John Toland (author)
This student essay consists of approximately 10 pages of analysis of Fundementals of Leadership in Nazi Germany.

Fundementals of Leadership in Nazi Germany

Summary: This essay deals with the basic leadership strategies that Hitler employed to control the third reich during WWII and the psychological implications thereafter.
Adolf Hitler's charismatic persona and direct appeals to the people of Germany's needs and wants resulted in him becoming one of the most powerful and influential leaders of all time.

The American Heritage Dictionary defines leadership as, "the position of office of a leader; the capacity or ability to direct others." (309-10) Although there is a textbook definition of the concept available, the actual idea of just exactly what leadership encompasses is entirely subjective. Each individual's perception of the notion can and often will differ entirely from one person to the next.

Even though it carries countless interpretations, leadership in essence, is a universal idea. Every society utilized the concept in some capacity.

One of the most prevalent questions regarding leadership today is the idea of whether or not it is a concept that is inherent or learned. Can we train someone to be an...