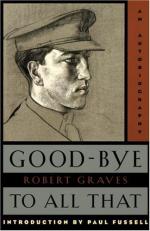 Goodbye to All That Essay | Essay

Summary: Robert Graves's Goodbye to All That, an autobiography of his accounts of the first world war.  The essay explores the wars; he depicts his war experiences in two diverse periods of his life.
Write about the different ways Graves explores his war experiences, in the following two contrasting passages
(98-101) and (235-236)

Graves' autobiography "Goodbye to All That" is seen to be one of the most exceptional first-hand accounts of the First World War.  Though it may lack the imagination and moral vision of his allies and friends Siegfried Sassoon and Wilfred Owen, his accounts do give an outstanding insight into life in the trenches and the effects war can have on one's life.  In the two passages Graves uses many diverse ways in which to depict his experiences during and post war.  This gives the reader a strong insight into the psychological and physical strains that Graves and his compatriots had to battle against.  The language structure which Graves uses allows great contrast and shows irony, particularly in the first of the two passages.  The...

More summaries and resources for teaching or studying Goodbye to All That.