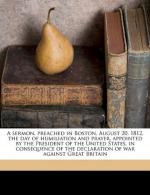 Get Consequences of the War of 1812 from Amazon.com
View the Study Pack

This student essay consists of approximately 2 pages of analysis of Consequences of the War of 1812.

Consequences of the War of 1812

America's decision to go to war with England in 1812 was considered foolish, because Britain was a major trade partner and because the United States had weak military forces.  However, the consequences of the war were very important to the United States.

A principal gain for the United States was a renewed self-confidence and faith in the strength of its military to help the nation. Even though neither side gained any territory, the American people saw the war as evidence of the success of the democratic side. American's felt unified after the War of 1812. The war showed the country that it could ward off any foreign threats.  In the end, American's looked for expansion at home as shown by the desire to gain more territory for their country such as Florida.

The War of 1812 helped the growth of manufacturers. Since the war, there was a disruption of trade and that promoted and developed manufacturing in the United States. The wartime experience produced a need for another national bank. The second Bank of the United States was chartered in 1816. Also, the American textile industry went through a growth increase, and the War of 1812 helped with this expansion. In 1813, Francis Lowell organized the Boston Manufacturing Company and found the first mill in America. This was an important step in revolutionizing American manufacturing.

During the war it was difficult to ship products, packages and parcels. There was a huge economic need for improvement in America's transportation system. With a better transportation system, manufacturers would have access to importing and exporting goods. The construction of the National Road began at Cumberland, Maryland. While that was going on, steam-powered shipping quickly emerged as another transportation option. The development of the steamboats were very popular as they could carry more cargo than flatboats, barges and others vessels. Railroads, turnpikes, and canals were becoming more helpful.

The War of 1812 was a very foolish choice for the Americans, but the outcome helped them after all. The U.S. gained more self-confidence in their nation.  The country was unified, the growth of manufacturing occurred, and transportation systems improved.

More summaries and resources for teaching or studying War of 1812.

Consequences of the War of 1812 from BookRags. (c)2022 BookRags, Inc. All rights reserved.